It is clear that groups are strange animals.
They never act as foreseen, they disrupt, they can be running amazingly for weeks and suddenly fully dysfunction for one small (perceived) parameter change. And that is fab!

What is key is to remember few concepts:

I think that the stage are not always sequential. Because what lives the group is often messy. Groups cycle through the phases throughout their process. What can be almost always witnessed is that when a group is newly formed, you can foresee a storming session! It is a huge advantage to know that this phase is quite usual. The question will then be: How well will you manage the tensions or conflicts? A key aspect to keep the process going and not to damage to object supposed to be build by the group.

A worst case is to my knowledge what we call Groupthink.
Why? It is the moment when a group of people are not thinking or are all thinking the same: 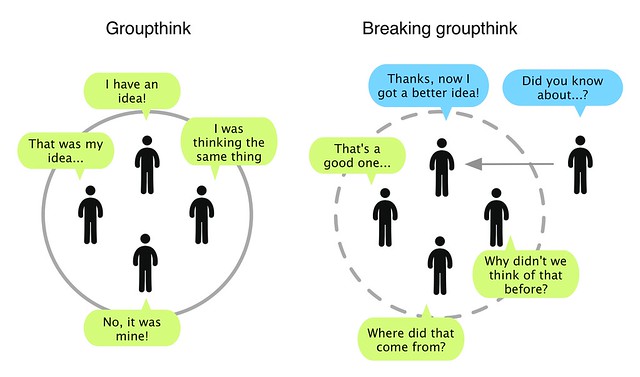 The idea is that groupthink is a kind of thinking in which maintaining group cohesiveness and solidarity is more important than considering the facts in a realistic manner. It occurs when a group of well-intentioned people make irrational or non-optimal decisions that are spurred by the urge to conform or the discouragement of dissent. In the interest of making a decision that furthers their group cause, members may ignore any ethical or moral consequences. The group is sort of reduced to one collective mind. Usually the leader is too directive and thus inhibiting alternatives. To stop this you need to encourage debate, look for different personalities, acknowledge biases, and reach out! The Victim: The Victim’s stance is “Poor me!” The Victim feels victimized, oppressed, helpless, hopeless, powerless, ashamed, and seems unable to make decisions, solve problems, take pleasure in life, or achieve insight. The Victim, if not being persecuted, will seek out a Persecutor and also a Rescuer who will save the day but also perpetuate the Victim’s negative feelings.
The Rescuer: The rescuer’s line is “Let me help you.” A classic enabler, the Rescuer feels guilty if he/she doesn’t go to the rescue. Yet his/her rescuing has negative effects: It keeps the Victim dependent and gives the Victim permission to fail. The rewards derived from this rescue role are that the focus is taken off of the rescuer. When he/she focuses their energy on someone else, it enables them to ignore their own anxiety and issues. This rescue role is also very pivotal because their actual primary interest is really an avoidance of their own problems disguised as concern for the victim’s needs.
The Persecutor: The Persecutor insists, “It’s all your fault.” The Persecutor is controlling, blaming, critical, oppressive, angry, authoritative, rigid, and superior (source: Wikipedia).

There are two crucial things to understand about the Triangle:
1) These roles are not authentic behaviors. The Drama Triangle is basically a sort of role play that anyone endorse upon a particular situation.
2) And everyone has at least one role that they feel very comfortable in (though not always consciously), and most of us have one role that we automatically step into in challenging the situations.

The way out is trying to recognize when we opt for one of those roles and to turn them around like:

The victim should be creator (Accepting own vulnerability, look for options)
The rescuer should be coach (How can I help you instead of only taking over…)
The prosecutor should be challenger (Assertive way to getting needs met)